Tuesday began bright and early with a wakeup call, not from students’ confiscated cellphones, but from Tomas, our resident Baltic Viking musician playing the bagpipes and knocking on cabin doors along with Simas. They invited us to join them for morning exercises that included stretching, an ancient war dance, and “bear fights.”

To kick off the theme of the day, “Our World: Countries, Languages, and Democracies,” we wrote questions about the theme on paper leaves and affixed them to the Tree of Knowledge.  We hoped to have the questions answered during the day, and when we did, the leaves fell and we replaced them with flowers. 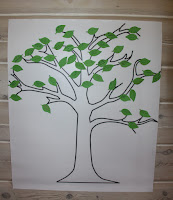 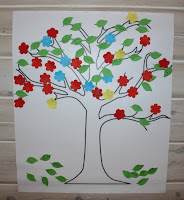 We drew names for our Secret Friends whom we will surprise with uplifting and inspiring notes during the week.

To learn more about the three countries we represent, everybody participated in quizzes and games and learned interesting facts such as: most Lithuanian-Americans and Polish-Americans live in Chicago; the national bird for Lithuania is the stork; and Poles do not use the Euro.

To follow that, students taught each other 18 useful phrases in Lithuanian and Polish such as smacznego and skanaus, which mean “enjoy your meal” in Polish and Lithuanian respectively.  These were real tongue twisters for the Americans who had the extra challenge of learning the phrases in both languages!  To reinforce our understanding of the phrases, we played language football and all the teams won football-shaped (soccer, for you American readers!) candies.

After lunch, we were honored by a visit from US Embassy Cultural Atttache Althea Cawley-Murphree and three others, and by a lecture about the constitutions of the Baltic States given by Dr. Ieva Deviatnikovaite, a professor of constitutional law from the Mykolas Romeris University in Vilnius who is also a former Fulbright scholar. 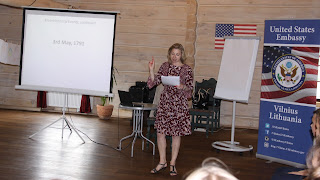 During some free time dedicated to sports, a group learned an African dance, others played a rousing game of beach volleyball, and a group played Zip-zap, a lively circle game.

After dinner, we played intellectual games that focused on democracies and other forms of government.  We played a matching game with flags, forms of government, heads of state, and capital cities.  During other games, such as Jeopardy, we learned that the first written constitution in the world was adopted in the United States in 1787 and the Polish-Lithuanian State was second in 1791. We learned the important role constitutions play in creating the foundation of democracies.  A talk and video reinforced the value of democratic government and the vital role that citizens play in maintaining a strong and stable government.

To end the evening, we celebrated the 17th birthday of Ryan, one of the American students, with three traditional Lithuanian tree cakes and then ended the very full day by sharing friendships around the campfire. 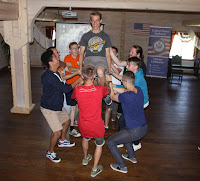