Day 6 - Our Society:the Future is in our hands! International organizations

Those of us who are not from Lithuania were surprised this morning to learn that a summer camp tradition here is a sleepless night on the last day of camp when campers can engage in fun and frivolity into the wee hours of the morn before they must say goodbye to each other.  This means that our blog will be extra long today! But, it WILL end at midnight and pick up again tomorrow!

At morning gymnastics, we danced a Polish dance taught by Beatta, a Lithuanian dance taught by Tomas (who also accompanied on bagpipe), and an American line dance, “Cotton-Eyed Joe,” taught by the American students.

Our morning session started with an introduction to international organizations such as Doctors Without Borders, UNICEF, NATO, and others.  We watched and discussed a video about each of the six organizations to learn their missions and the roles they play in the world.  We also watched a video of Malala’s speech to the United Nations General Assembly. Next, we created a poster for each organization that reflects its purpose and importance in bettering the world.

Althea presented each of us with a certificate for successful completion of the camp and spoke about future opportunities for all of us -- students and teachers -- to apply for internships, study abroad exchanges, Fulbright scholarships, gap year programs, and other programs aimed at developing communities that support democracy, education, and bonds between people and countries. She spoke about how, after spending a week getting to know each other and build friendships, we are a refection of what we hope for our countries, that they will be strong, cooperate with each other, and remain strong friends. Althea also thanked all of us for being campers and in turn, we thanked the Embassy personnel for the opportunity they have given us to participate in Democracy Camp. 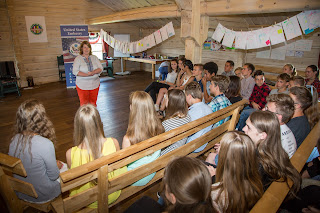 Joey and Sandra gave an overview of how they became members of the US military and what jobs they have held. Joey is an active duty officer stationed in Lithuania and attached to the Embassy, and Sandra is a former Lithuanian citizen who immigrated to the US with her family, got citizenship, and joined the army.  Now, she is working on her master’s degree in San Diego and aspires to someday join the Foreign Service.  The focus of their presentation was on leadership and “followership,” how teams work best together.

To give us practice in leadership and in working as teams, they took us outside to a field they had set up with obstacle courses. In small groups, a blindfolded person navigated the course with the help of two people who could not see the course, but could speak, and three persons who could see the course but could not speak.  This was an excellent exercise for us to figure out how to rely on each other and communicate with each other to reach our goal of getting the candy that awaited us at the end of the course.  After this, they held a push-up competition reminded us of the military’s requirement for discipline and physical fitness.  Arturas from Lithuania and Emma from the United States won prizes.

The Embassy gave us two-sided flags, so the photos show dozens of American and Lithuanian flags waving in our hands.  We took photos on the beautiful lawn and under clear and sunny skies before saying one last goodbye to the Embassy staff as they departed for Vilnius. 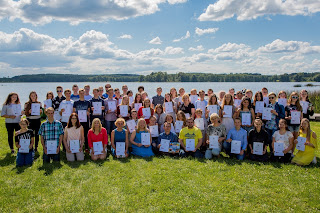 At dinner, we thanked the marvelous kitchen staff and the resort owners for their hospitality and excellent care of us during this week. 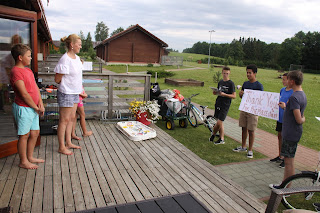 After our final dinner together, we tested our teamwork skills by building “democracy towers” out of magazines and tape.  The challenge, besides building the tallest freestanding tower possible, was to do so without talking after a five minutes planning session.  Using only body language to communicate, we built towers of varying heights, many towers engineered in impressive ways.  The judges awarded the winning team chocolate gold medals.

As the sun dipped below the horizon, we ran around the camp participating in an orienteering exercise that was organized by Tomas and Simon around each day’s themes. At each stop we had tasks such as riddles to solve, exercises, or other challenges.  As Philippe from Poland stated when he took a quick break between stops, “We’re definitely ending this camp on a high note!”  The winning team was the Ents.

We soon turned the dining hall into a discotheque.  The dance was a lively celebration interrupted by very impressive and creative performances by groups -- and a surprise dance from the tutors who danced to “Uptown Funk” until they pulled many of us onto the dance floor!